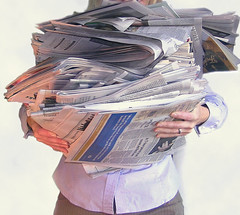 I’ve already written at length about their lack of a systematic corrections policy, and the superficiality of much of our reporting; today’s bugbear is their casual approach to bylines.

In the context of a newspaper article, a byline is simply the name and often, the title or position of the person(s) who wrote the story.

Sometimes, particularly in the case of editorials – which are opinion pieces written by editors or columnists – explicit bylines are omitted. Editorials in The Express, for instance, are labelled “Express Editorial.”

But news stories and analysis pieces are different; they are supposed to be objective and fact-based, rather than polemical and necessarily partisan.

But no one is entirely objective, and no reporter, however scrupulous, is immune to bias.

Moreover, as the bloggers over Eastwick Communications, a technology PR agency, noted:

By the time we read any news article or watch any news segment, even the most “objective” news has been run through a series of bias filters. Each news department selects which stories to cover and which reporters to cover it. Each reporter selects which aspects of a story to focus on and which details of all possible details to include in the story. And editors make selective changes to fit a variety of criteria.

All news is filtered. This is an inescapable fact, and it is why the identity of the author of the story – or in the case of syndicated or externally-sourced content, the source – is so important.

If a story appears in a newspaper (or on a newspaper’s website) without a byline, I have no way of knowing who wrote it, or where it came from.

Here are a few case studies of why bylines matter.

The Trinidad Express ran a piece on Monday 17 March titled “RBTT…what to do?”. The online version of that story, and the only one I have access to, nowhere states where it came from, or who the author was.

In our last article we evaluated the fairness of the valuation of the Per Share Consideration in the proposed Amalgamation of RBTT Financial Holdings Ltd (RBTT) and RBC Holdings (Trinidad and Tobago).

The valuation was conducted using the Discounted Cash Flow methodology. You would recall that based on our calculations the Per Share Consideration of TT$40.00 was not considered unreasonable.

Our article today, the last in our short series, concludes our discussion of the question of valuation, by examining the Earnings Multiple Method, in order to further test the fairness of the valuation of the deal. We will also provide our recommendation to shareholders.

Now, this was not a news story, or even an analysis piece, and it was most certainly not written by a reporter.

This is investment advice, and I don’t know who this “we” is. If I were an RBTT shareholder (and I am not), I would want to know whether the entity advising me to accept the RBC buyout had a vested interested (i.e. they’d make money) in seeing the deal go through.

Without knowing who wrote the piece, I would have no way of checking that.

A counterpoint to the way this report is presented is a similar story in the Jamaica Observer, which the Express syndicated on March 19th (with the a glaring typo in the headline: “Jamacian analysts look forward to bank purchase.” Aargh.)

A financial expert in Jamaica believes that the proposed sale of RBTT Bank to the Royal Bank of Canada (RBC) would increase diversity in the sector while another is saying the potential deal should be looked at in a long-term perspective.

Alexander James, a stockbroker at First Global Financial Services, echoed the view that “the RBTT sale brings a lot more diversity into the market”, the Jamaica Observer reported.

I object to the description of Mr Alexander James as a “financial expert”; a stockbroker is someone who buys and sells shares on behalf of clients on a commission basis. Mr James is not a financial analyst or investment advisor.

Still, at least the Observer named names and companies, and the piece as a whole is well reported.

Here’s another example of a missing byline, also from the Express on March 19, in the Business Magazine section:

Microsoft Corp chairman Bill Gates said he expects the next decade to bring even greater technological leaps than the past 10 years.

No Express reporter wrote that story. The author was a business writer named Matthew Barakat, of the Associated Press news service.

Now, the Express regularly uses material from services like AP, Reuters and Bloomberg. In newsroom jargon, these are the major “wire” services, which newspapers and other media outlets use for the stories and photographs they don’t themselves have the resources to produce.

These wire services allow newspapers like the Express to syndicate their copy – for a fee, and with the agreement that they will be credited as the source.

Reproducing content from outside sources – without attribution and without permission – is not just sloppy. It’s plagiarism.

The Express isn’t the only one to do this sort of thing, and on a regular basis. The Newsday is notorious for this.

The Media Watch blog highlighted a recent example, in which Newsday “reprinted” an article about the murder of British socialite Gale Benson in Trinidad in January 1972.

The piece, which Newsday ran on February 24, was lifted wholesale from a British newspaper – the Daily Mail. Newsday did not credit either the author (Victoria Moore), or the source.

This kind of behaviour would get an university undergraduate expelled, but the editors of Trinidad’s daily newspapers seem unconcerned – which is, in itself, deeply distressing.

1 – What are the economics of the proposed government-sponsored, Caribbean Airlines corporate/executive jet service?

2 – What are the current arrangements for government travel? Where do ministers et al go that requires the use of a jet leased from Guardian Holdings? How much does that arrangement cost? Why is it preferred to flying commercial services, either local or international?

3 – From Ria Tait’s Trinidad Express article on March 4 2008: “On allegations by Opposition Chief Whip Ramesh Lawrence Maharaj that CA received $350 million from the Government for the venture before Cabinet held discussions on the proposal last Thursday, Lok Jack said Caribbean Airlines did get money because “we had to begin negotiations and make downpayments”.” Caribbean Airlines had to make downpayments on an aircraft that hadn’t even been approved yet? Really?

4 – From the same article: “[Lok Jack] declined to say exactly how much money Government advanced to the airline or how much the service was estimated to cost on a monthly basis, saying that the airline was in a competitive situation.” Is anyone looking into this? We have a right to know how much our government is spending on this. And with whom, exactly, is CA “in a competitive situation” in the business of providing private jet travel to the government?

4 – Ibid: “Lok Jack said…the Government was “very interested” in being able to go on transatlantic trips and to travel African countries and therefore CA chose an aircraft which had the range to make such flights.” Why the focus on African countries? How much does a long-haul flight from Trinidad to Lagos (say) cost, in terms of fuel and wages for the pilots, etc? Are there no commercial alternatives?

6 – In Juhel Browne’s Trinidad Express article on March 2 2008, Prime Minister Manning says a Caribbean Airlines jet service would be a cheaper air travel option for the State: “Right now, when some of us, when the Prime Minister travels in the region now, we do so by contracted private jet services. It costs a lot of money,” Manning said. Contracted jet services for regional jet travel? Seriously? Exactly how much is a lot of money? And again, why are commercial alternatives rejected?

7 – Who will have use of the services? Government only? Friends, family members, well-wishers? The Opposition? At what cost? Who pays what?

The relevant company insiders are fairly high-profile types who should be reasonably easy to track down. I’m tempted to make some calls.

This work by The Liming House is licensed under a Creative Commons Attribution-NonCommercial-NoDerivs 3.0 Unported.