The piece below appears courtesy Laurie Voss of Seldo.com, who wrote it in honour of the It Gets Better Project and speficially for gay teens in T&T

Hi. So I know this is several paragraphs long and you were born into the age of YouTube so you may not get to the end of this. In which case, here’s the summary: it gets better. It’s really bad now, it may even get worse, it will become unbearable, but somehow you’ll bear it anyway. And then it will get better.

END_OF_DOCUMENT_TOKEN_TO_BE_REPLACED

This is one of those topics that I have long sought to write about and never quite succeeded. I have drafts saved on this very subject dating back to 2002. What’s changed? Very little, and therein lies the rub.

And then there were these comments from Bruce Golding, the Jamaican Prime Minister, during an interview on the BBC’s Hardtalk program:

BBC: Do you in the future want to live in a Jamaica where a gay man or a gay woman could be in the cabinet?

BG: Sure they can be in the cabinet – but not mine.

BBC: Do you want to live in a Jamaica where they can be and they should be and it would be entirely natural for them to do so?

BG: I do not know that that is the direction in which we will go.

So far, so straightforward, right? No. It is more nuanced than that, because here’s the exchange that preceded those quotes:

BBC: What are you doing about [the violence toward homosexuals in Jamaica]

BG: Well, we have given instructions that crimes against persons because of their sexual orientation must be pursued with the same vigour of any other crime.

BBC: But they are not, are they?

BG: Generally speaking they are – they are now. We do have a long-standing culture that is very opposed to homosexuality. I think that is changing. I believe there is greater acceptance now that people have different lifestyles, that their privacy must be respected.

BBC: Are you more accepting now … because in 2006 you were quoted in the Sunday Herald newspaper: “Homosexuals will find no solace in any cabinet formed by me.”

BG: In appointing a cabinet, a PM exercises judgement. That is his exclusive responsibility. There is no right to be in a cabinet.

BG: No. I consider people in terms of their ability and the extent to which they are going to be able to exercise their function, their independence.

BBC: You also clearly and patently consider them in terms of their sexuality.

BBC: What kind of signal does that send about Jamaica to the outside world? Indeed, to potential investors, to countries that look at Jamaica.

BG: One signal that it sends is that Jamaica is not going to allow values to be imposed on it from outside. We are going to have to determine that ourselves and we are going to have to determine to what extent those values will adopt over time – to change in perception and to change in understanding as to how people live. But it can’t be on the basis that lobby groups far and away from Jamaica will define for Jamaica how it must establish its own standards and its own morals. 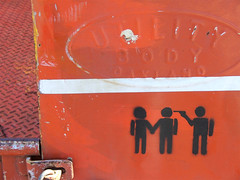 And that, in a nutshell, is why homophobia in the Caribbean is so difficult to understand, so easy to misconstrue, and so challenging to confront – it is a morass of Victorian prudishness and religious fundamentalism combined with an extreme interpretation of masculinity and imbued with a sense of developing-country nationalism and a post-colonial assertion of sovereignty.

And it is everywhere. The Barbados Underground blog, for instance, is apoplectic that the “homosexual agenda is gaining ground in Barbados,” noting:

The issue of homosexuality will predictably evoke a flurry of comments which will seek to label the Barbados Underground household as homophobic. By now it should be evident that the BU household is firmly moored to a traditional set of values which has served our household well. The unwillingness of Barbadians to be proactive in structuring the kind of society which it wishes to adopt on a moral front is disappointing and regrettable.

Unfortunately certain core values which have guided our society very well through the years are being diluted. We appreciate that we have to respect the sexual orientation of all of our people. However, there is nothing to say we have to agree with it. We may appreciate in the so-call free world market the need for Barbados to operate in a common economic space. What we don’t appreciate is the willingness by Barbados to prostitute its value system for thirty pieces of silver.

The argument there is similar to Mr Golding’s in its appeal to “core” values, the rejection of any attempt to superimpose an alien (read: non-Bajan) and “dilutive” set of beliefs onto the “traditional” way of doing things.

Still, there is one aspect of these positions with which I do agree – any change in attitude or legislation cannot merely be a response to political or economic pressure from the UK or the US.

The Caribbean, in asserting sovereign rights, needs to take some sovereign responsibility.

So where to start? One suggestion comes from James Marchand, in a letter to the Jamaica Gleaner:

The gay people of Jamaica do not need the permission of churches, Government or public figures to live our lives and have sex with whom we choose. However, we do want the Government to put its policy where its mouth is and ensure that violent acts against people of different sexual orientation and also other vulnerable members of society, such as the disabled, mentally ill and even people living with HIV and AIDS, are punished to the full extent that law provides.

This should be done with the creation of a hate crimes law which would serve specific penalties for persons accused of harming or murdering people because of their differences, whether perceived or otherwise.

In reality, it only takes an assumption or a suspicion of being homosexual in some Jamaican communities for someone to be attacked and brutalised. Of the many cases that have come to public attention of ‘gay’ men being beaten and even killed, very few have been as a result of these said men being caught in compromising positions. Yet, they are set upon and, in what might seem like sanctioned events, the all too familiar scene unfolds.

I am the girl kicked out of her home because I confided in my mother that I am a lesbian.

I am the prostitute working the streets because nobody will hire a transsexual woman.

END_OF_DOCUMENT_TOKEN_TO_BE_REPLACED

This work by The Liming House is licensed under a Creative Commons Attribution-NonCommercial-NoDerivs 3.0 Unported.